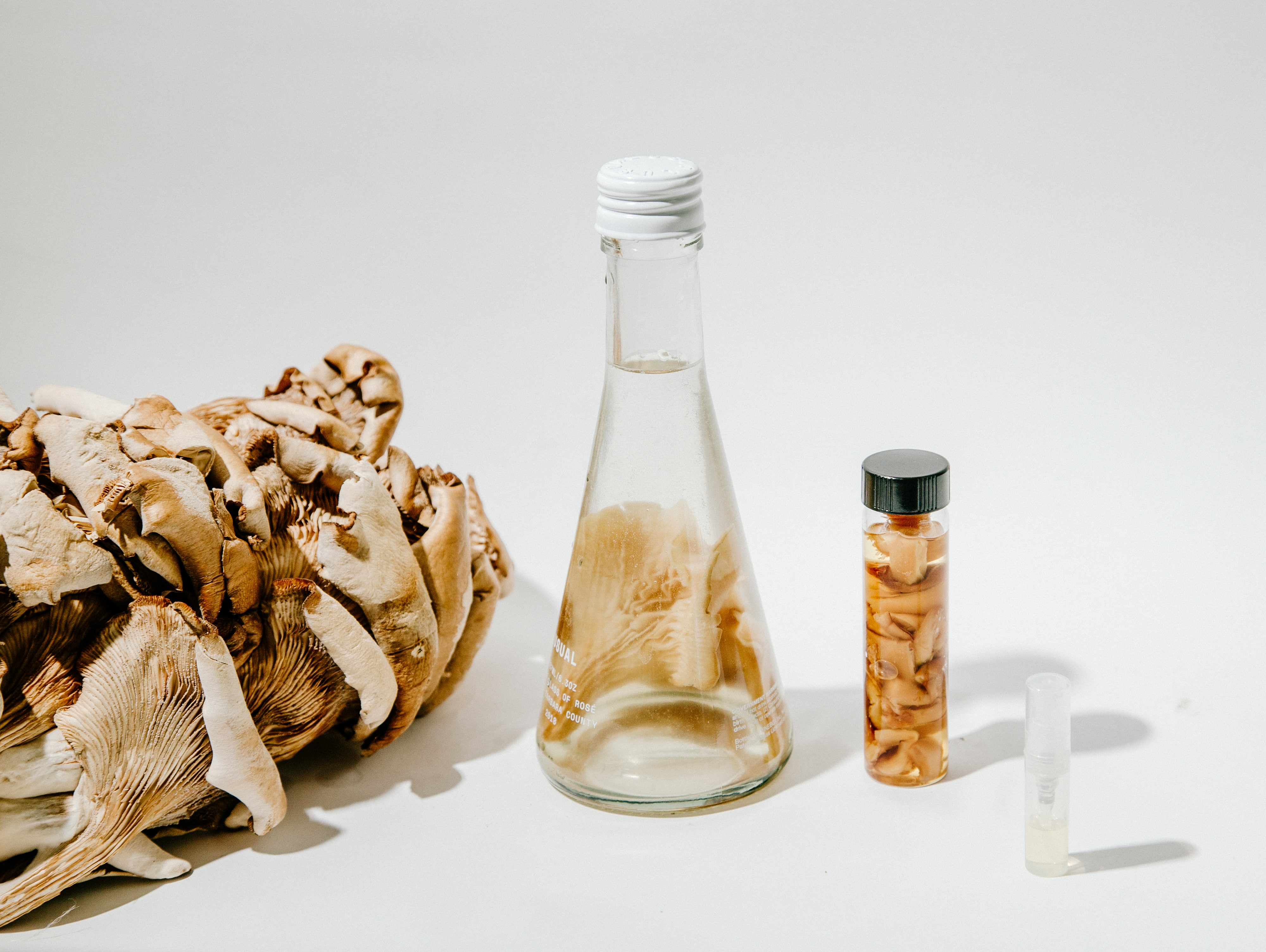 A video and photo series produced throughout 2020 that explore the ways in which we navigate contemporary food spaces and relationships with nonhumans, examining the sensory strategies we might employ to engage with our food system.
‍
The images process contemporary spaces of apocalypse—spaces are designed to alienate us from the natural world, sensory deprivation turns biological material into commodities. Those spaces also set a backdrop to our relationships with nonhuman agents in our food system and in our environment, as well as our relationship to the senses of taste and smell as anchors in those spaces. This series aims to capture a type of sensory 'forgetting' that expedites our skewed relationship with food in the contemporary industrial food system. Human's inability to notice change over time (the metaphor of the frog in boiling water) is a primary reason we have not been able to create a more sustainable and equitable food system—we are unable to see our losses. By turning towards a more embodied and sensory means of understanding change to our food system over time, we can pivot the ways in which we engage with our food future.

The Banquet of Bitterness 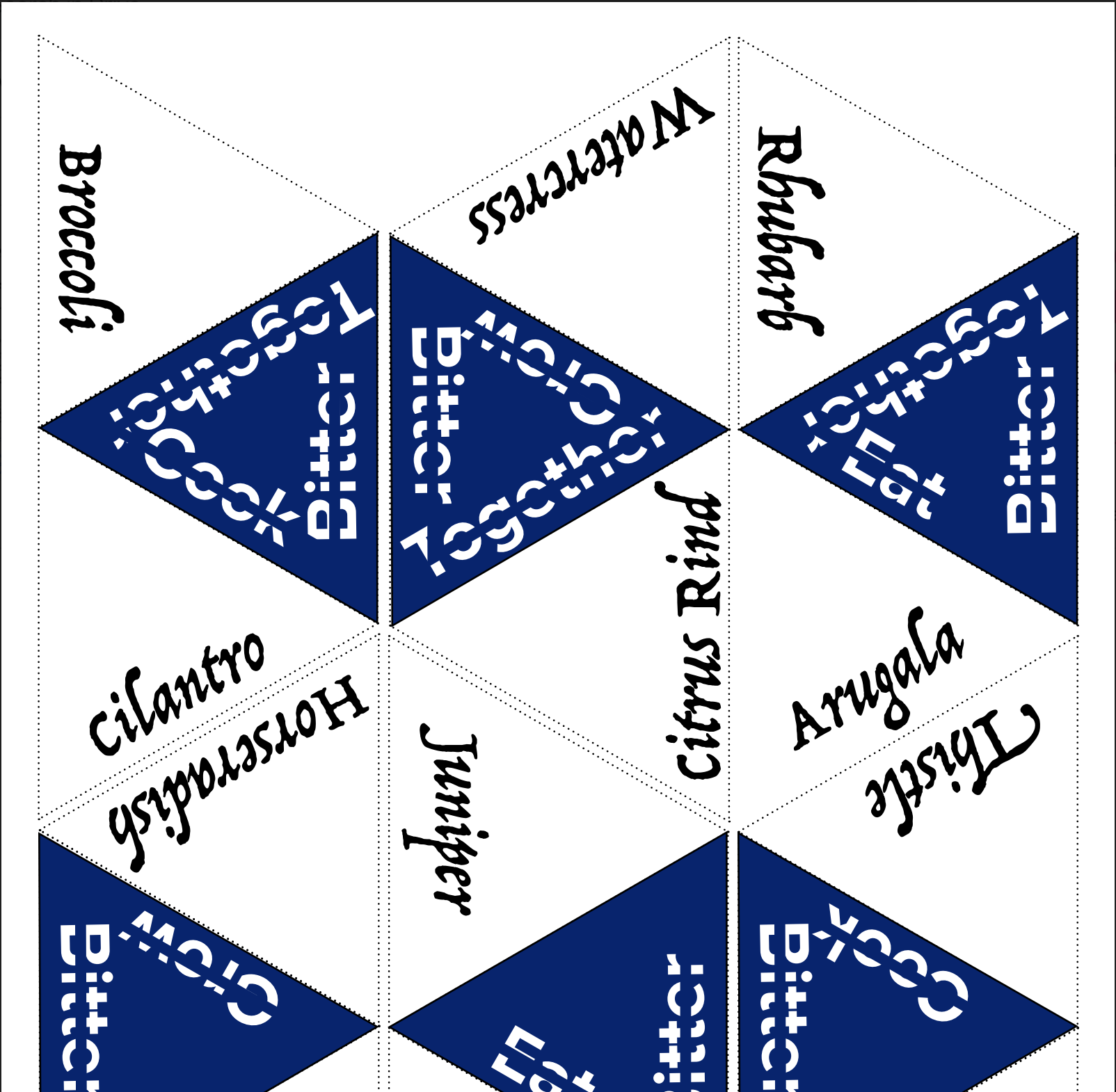 The Banquet of Bitterness dives into the world of the space witch as we commun around the caldron. Space Witches draw their power from their relationship to gender, land and reproduction. We find this most potent in the food we brought with and center its convergence in bitterness. Bitterness has long been a marker of potentially toxic substances, a marker in time informing our lives and our placement in the world around us. As we mark our new paths in space we shed the dominant framework we converge in the sky creating new constellations and cosmos. We invite all space witches to converge in the cosmos at the Banquet of Bitterness. Taking with us our histories of food and our journeys on land we converge at the table. Space Witches feast on and take strength from their bitterness and trauma. Their orientation is orbit, circular, cyclic, their understanding is metabolic, cooking (constructing) and consumption (deconstructing) as a ritual act. Join us as we tak to the skies to reposition ourselves in the universe and to re-write our histories and futures using food, land  and the queer and female erotic. 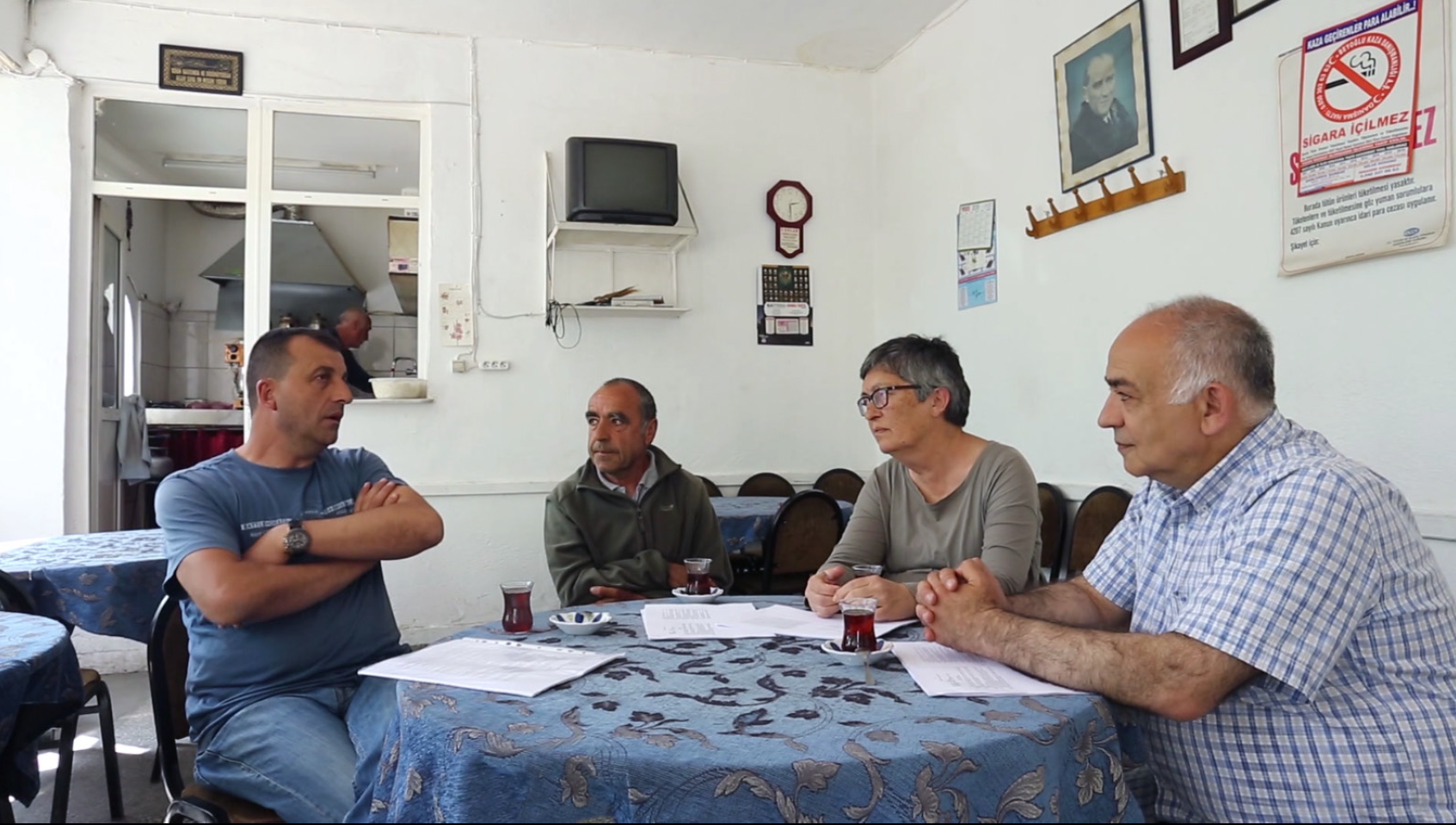 This work was produced for the 2016 Cappadox Festival under the motto “Let Us Cultivate Our Garden.” Following the question, “What is it that prevents us from cultivating our garden?” Molinos decided to tackle the bureaucratic obstacles in agriculture and address one of the most controversial plant biodiversity laws introduced over the past few decades in Turkey; the Seed Law no. 5553. In close collaboration with independent researcher Ayse Ceren Sarı, Molinos conducted meetings and interviews on the transformation of agriculture with several people in Cappadocia and across Turkey, among them farmers, agriculturists, gardeners, environmental activists, PhD students, academics, researchers, villagers and seed traders. Focusing on the specific case of Seed Law no. 5553, Ayse and Asunción tried to understand seed policies and what these policies imply for the region through the opinions and comments of the interviewees. 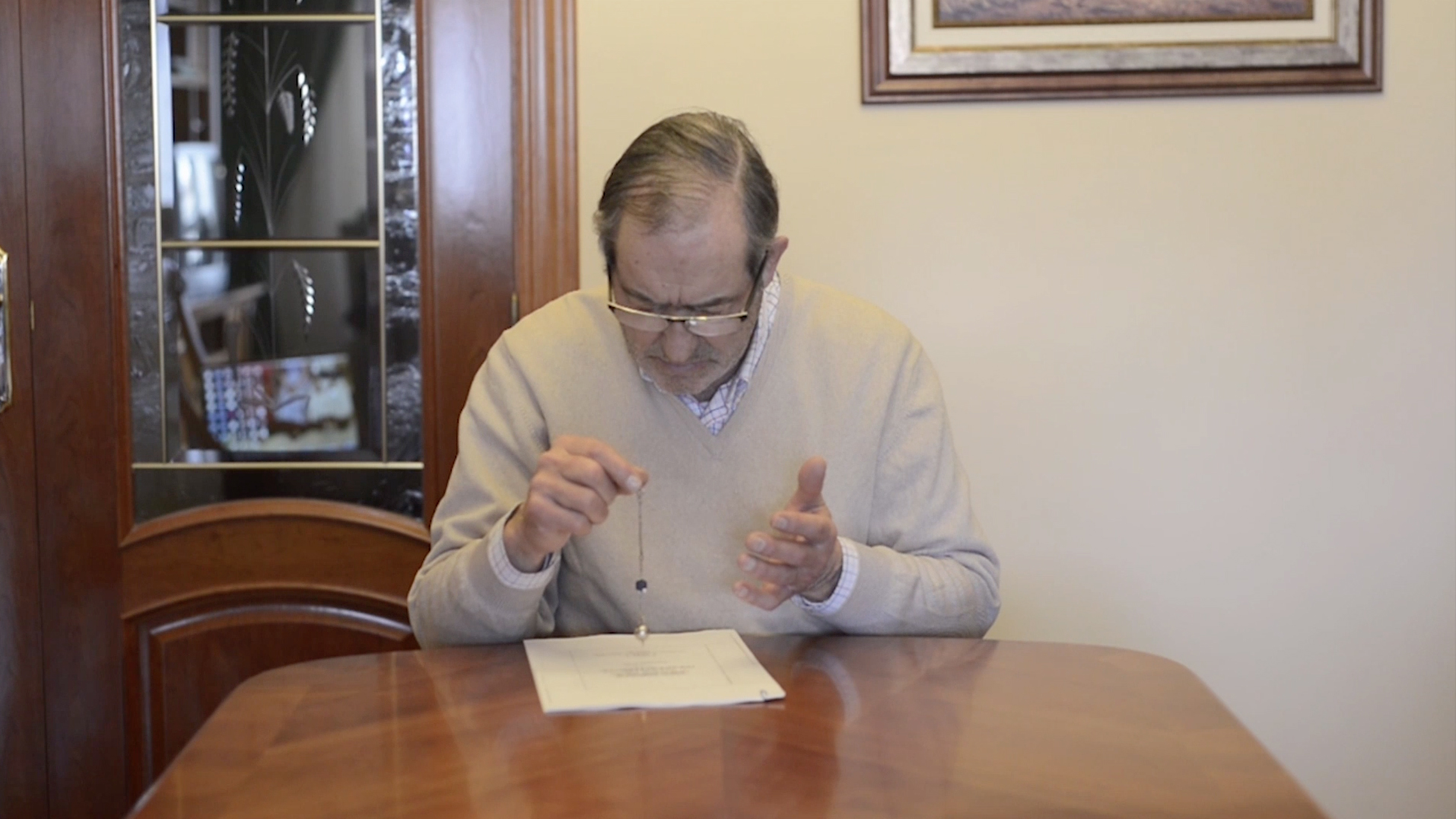 In this work, Molinos focuses on the study of the legal categories that regulate the circulation and use of new plant species for food or medicinal use, specifically the Spanish legal regime for the protection of plant varieties. Within the set of laws and decrees issued from 1961 to the present day, all agree in granting the category of “breeder” in absolute exclusivity to the personnel that modify crops in the laboratory, denying the farmer the fruit of their own intellectual and scientific production. The aforementioned legislation does not recognize the work of improving seeds and creating new crops, carried out by generations and generations of farmers. The intention of this project is to reverse the direction of the interrogation and study processes, where legislation and science lead the way in cataloguing the world's entities. 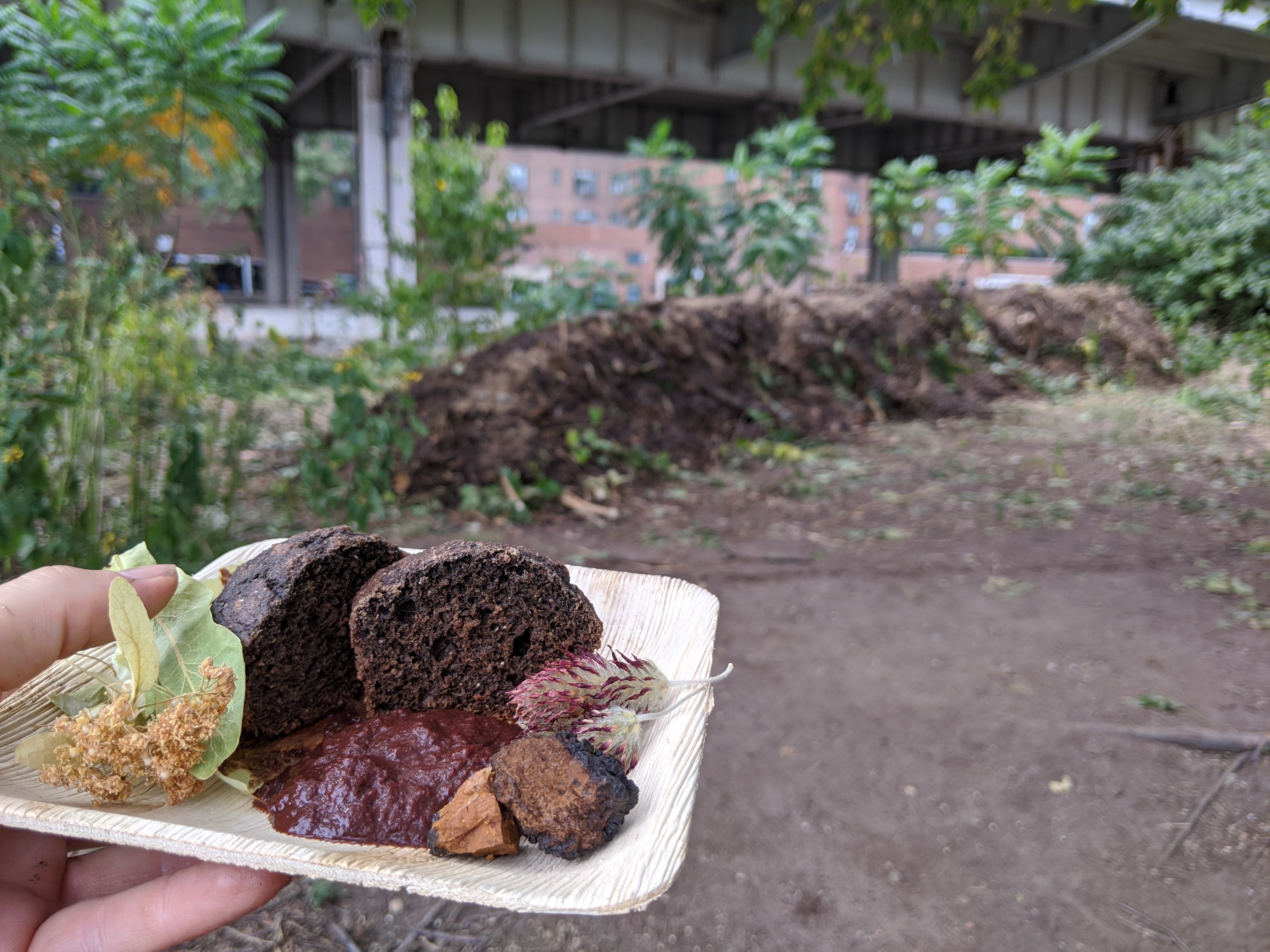 In collaboration with Solar 1, New York City's only self-sustaining, solar-powered building, Candace Thompson presents a video made for this series that focuses on urban foraging in Stuyvesant Cove Park, a public park committed to wild food education and urban permaculture initiatives.

Thompson offers foraging tips and preparation techniques while speaking to the ethics of foraging in relation to our corporatized, global food system. Thompson’s C.U.R.B—the Collaborative Urban Resilience Banquet—attempts to adapt to climate changes by meeting (and eating) the vegetation that grows in urban spaces. Her Instagram handle for the project (@the_c_u_r_b) documents her ongoing research surrounding wild foods in the urban environment, agroecology, food justice and more.

Candace Thompson is an artist, citizen scientist, activist, and land steward who collaborates with soil, plants, microbes, fungi, animals, food, land, digital media and other human beings in the search for healing, resilience, and mutualism as we face climate crisis.

A Good Morning in Cake Town 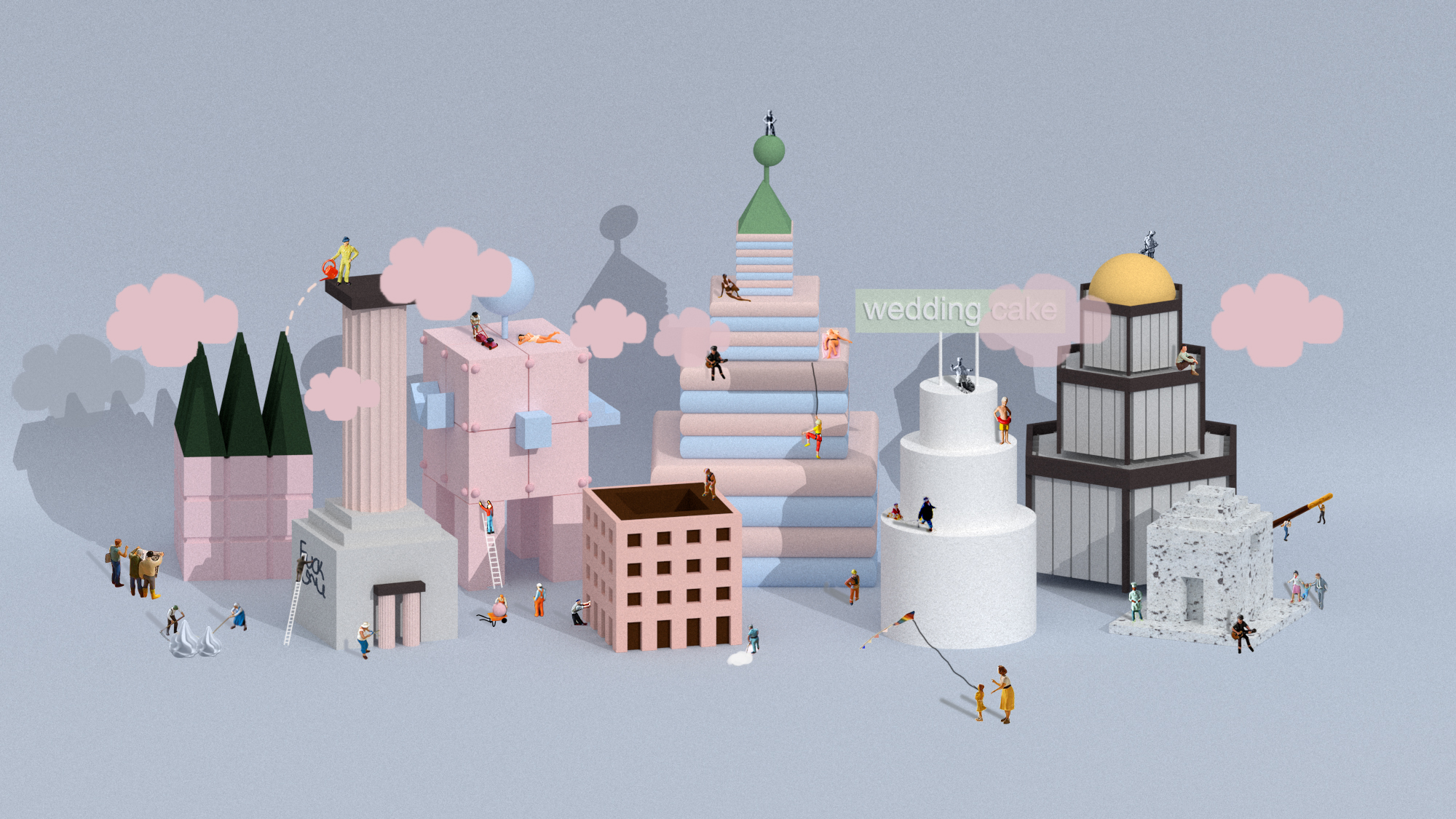 Welcome to Cake town! We are Esra’s Mini Mini Cake Architecture and Co. We tell stories through cake m(b)aking.We discuss dining table rituals, food, and culture.We play and chat over baking techniques, rethink recipes, the tools, and the kitchens we use.Make sure to not forget to check our town website, prepare your apron and get ready to play. 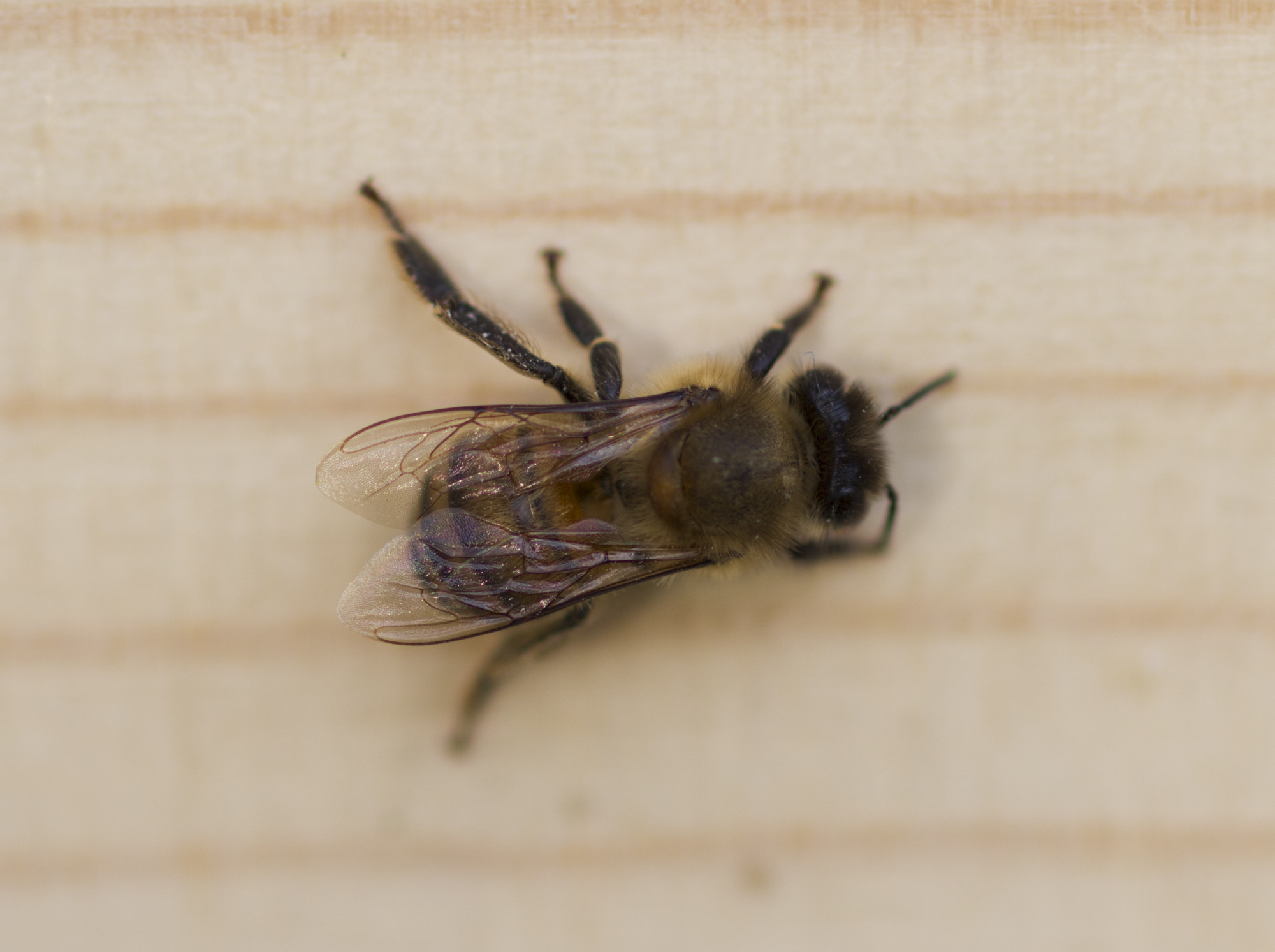 zzzzzzz is a mobile, functional sculpture. It consists of a custom-made captain’s bed. Its drawers are outfitted with langstroth - style beehive frames that house four active beehives under the bed. A mesh canopy surrounds the sleeper. Bees have the same diurnal cycle as humans, returning home at dusk, and leaving the hive in late morning. In the nighttime, the bees return to the hive. After dark, the bees remain in the hive, making the bed suitable for human activity. In 2016, Segall took the sculpture on an itinerary following the mobile beekeeping industry. Destinations included the largest animal migration on earth: the February almond bloom in California. 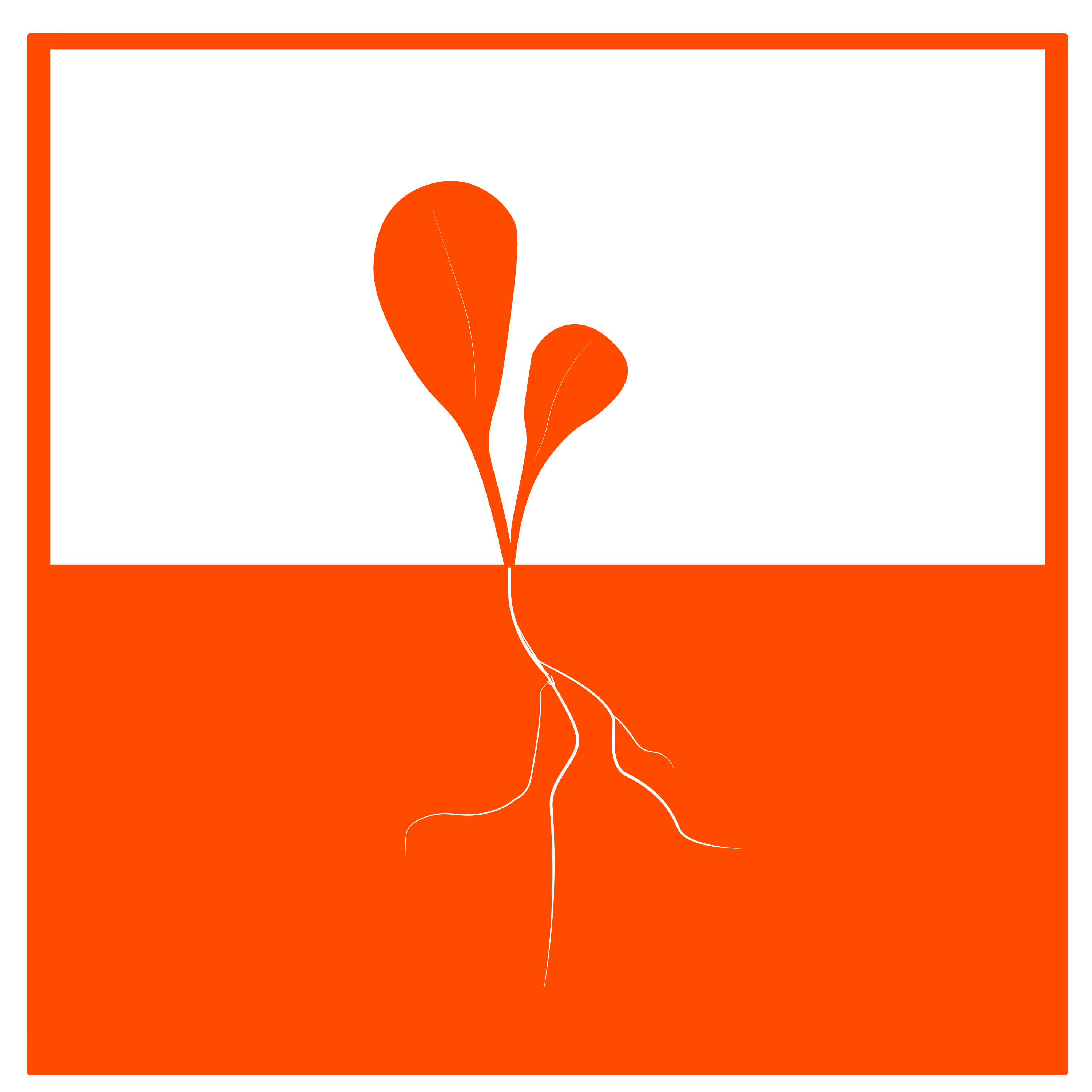 Seeds were so in demand at the beginning of the pandemic that there were seed shortages. As people began to grow their own food at home for the first time, it felt like an empowering movement towards food autonomy. At the same time, farmers warned that when amateurs used all the seeds there would be none left for the farms who provided food at a scale, while others had to dispose of tons of food that would no longer make it to market. Lily’s work began with the simple truth that all food systems start with seeds and became an inquiry into seed keeping methods across the world, the inherent power of the largest seed holders, and how simple seed keeping methods was a key to unlocking infinite food. This inquiry has taken three forms, research into seed keeping architecture, a speculative projection for the seed economy, and a set of mailed seed packages for public participation. The seed packages contain a simple set of actions, or choreographies, connected to the value of seeds, called Seed Dance, a tribute to Octavia Butler’s Earth Song, a rich spiritual system of connecting to the earth, but instead of words, uses choreography to connect. Seeds are a vital and magical link between our past and future and between us and the nonhuman world. 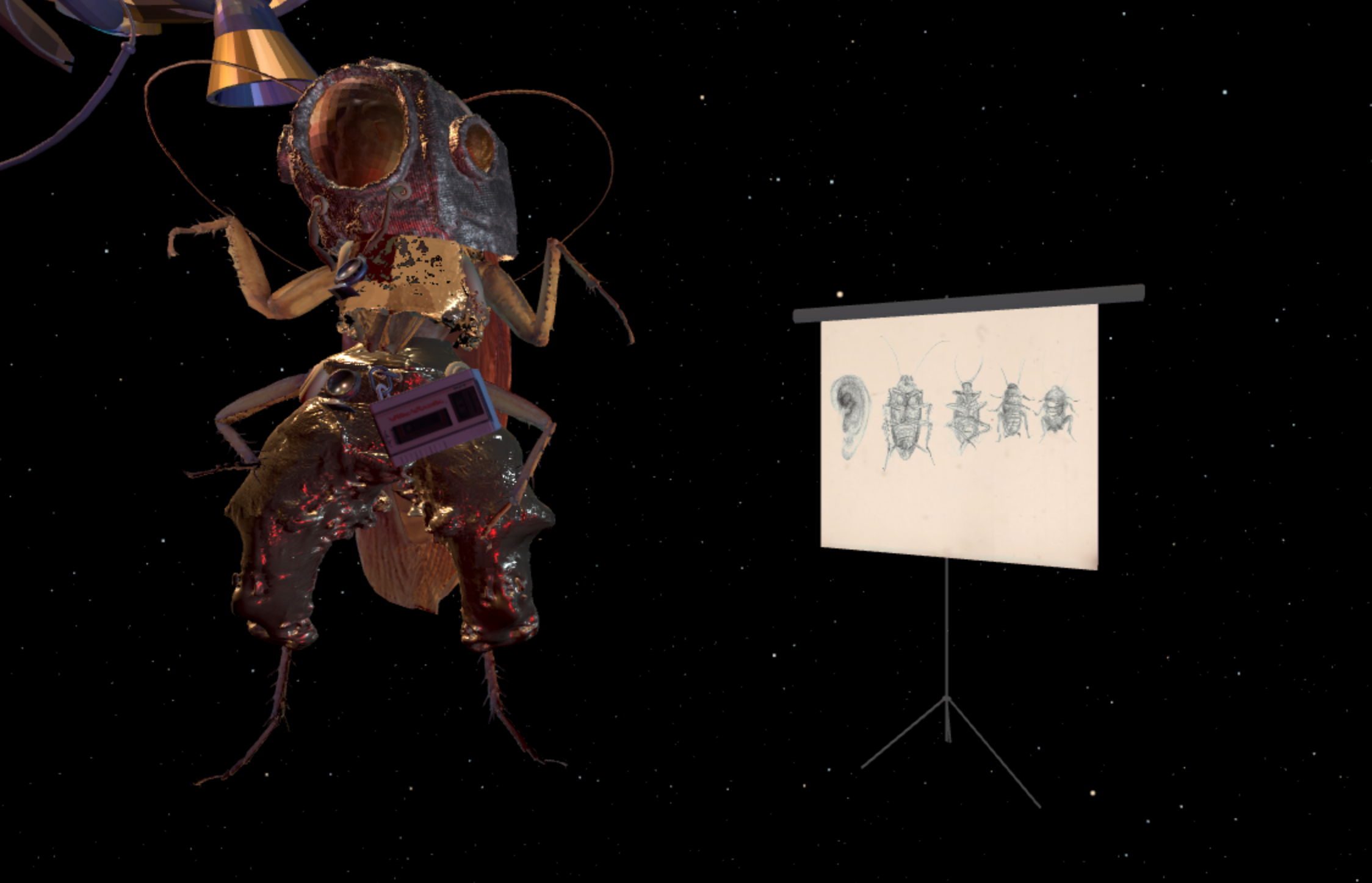 Space Witches re-examines the concept of the commons, our attitude to shared resources and localized embodied knowledge through a feminist lens. The history of witchcraft and the history of gender and land ownership are deeply intertwined. During the transition from medieval to modern times, fundamental attitudes about the location of knowledge and power, and the connection between the human body and the wider physical universe underwent a drastic transition. Land use was privatized, and women, who could not hold land titles, were excluded from its use. We are familiar with the many advances that modernity and the advent of modern science have brought; everything from toasters to the discovery of quantum entanglement. There is the colonialist t narrative of the taming of the wilderness and an expansion into the far reaches of space. But what might a space exploration look like if it drew on a different tradition? What if we included non-human perspectives in our calculations? Space Witches imagines what space exploration might be like if it was rooted in a science that grew out of the tradition of witchcraft instead of Elon Musk launching the dildo of capitalist nationalism into the starry void.

drugscapes is a graphic lyric essay prototype for an ongoing project that traces mind-altering substances across U.S. history and its military and culture wars. More an evolving assemblage of notes and materials than a finished composition, drugscapes began as a study of opiates but has since expanded into a more open-ended exploration of illicit substances in general, the notions of free will and social responsibility invoked around them, and the populations who are invariably targeted in the paradoxical crusades against these inanimate substances. Original texts and drawings are interspersed with newspaper clippings, archival posters, audio recordings, and video footage.

ZÀO: A History of Chinese Dishcourse through Famine and Revolution 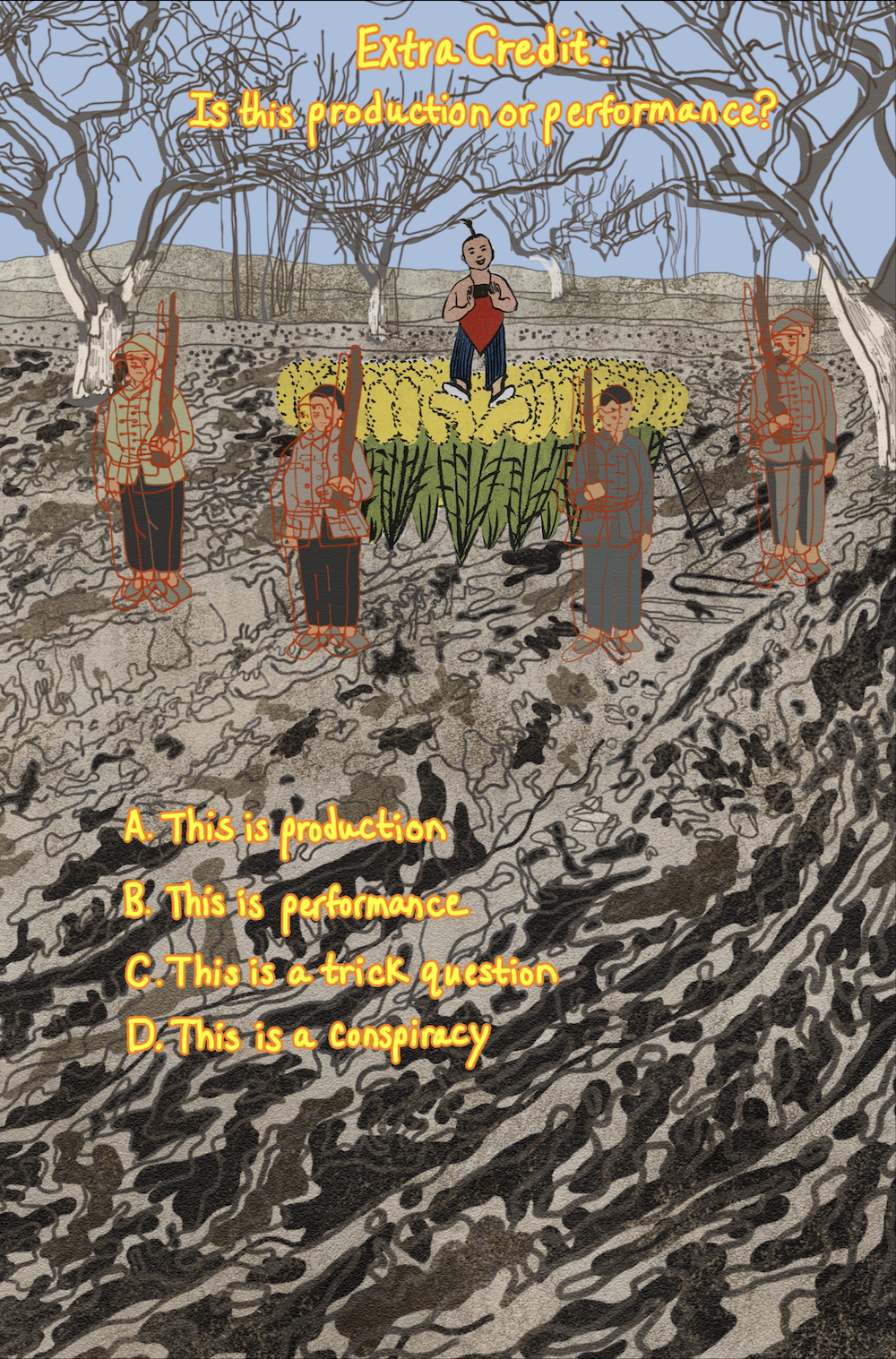 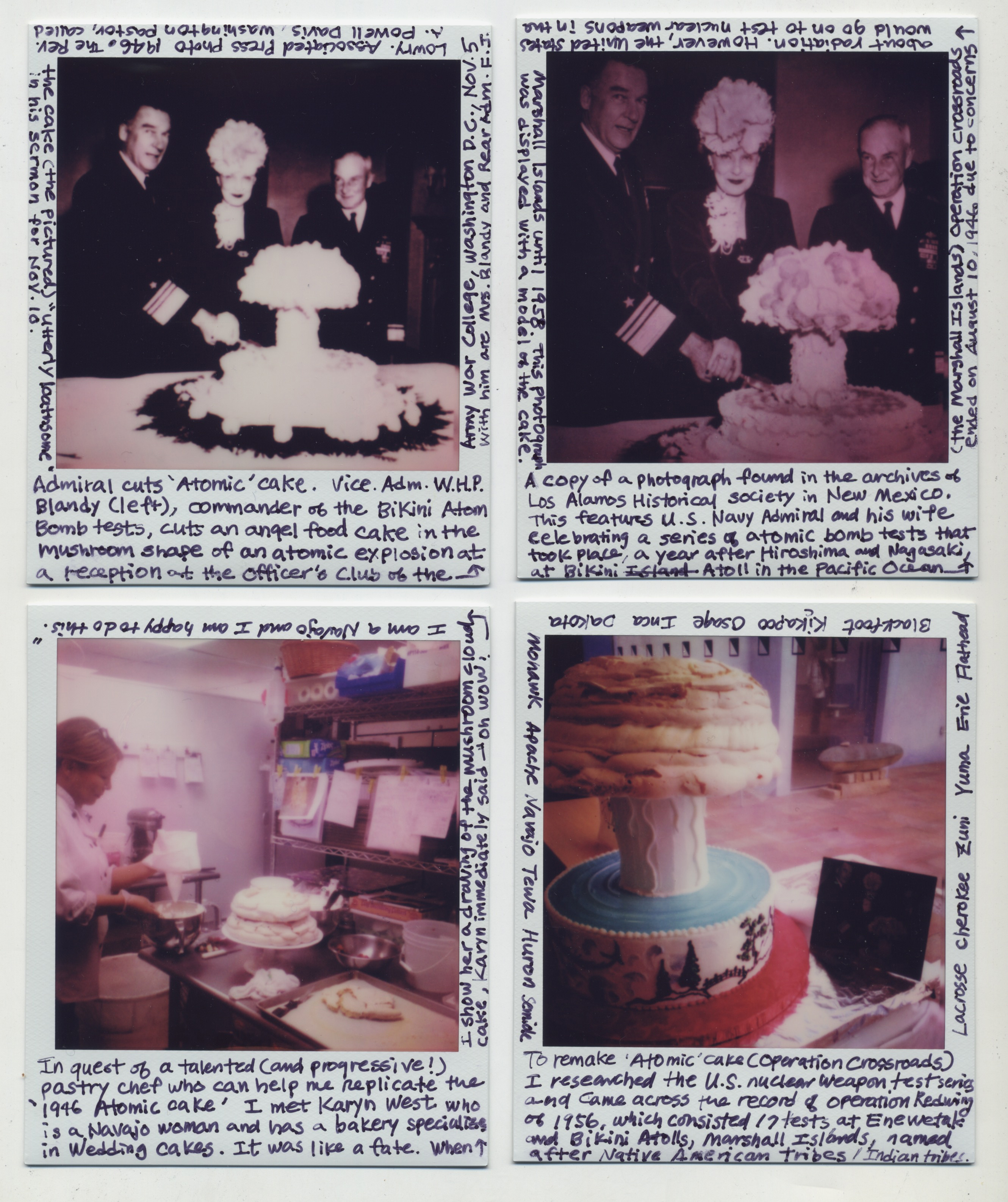 Where do I reside? I journey to a particular place and space where I can formulate critical thinking about the colonial histories of our foodstuffs and the continuous struggles for decolonization of our foodscapes, in the context of our transnational capitalist economy. I am often lost in maps of nowhere and then find pleasure in landing on a place that exists out of my consciousness. I “DO TRESPASS” in many of these unrecognized places, fields in which I am prohibited to step in. These fields have intricate influence on my bodily infrastructures and therefore distant lands suddenly become close to my own corporeal experience. Let me start with eating mud. It is so odd that as a practicing ceramicist I had never thought of digesting its substance – minerals, water and microbes – in my own body, physically and metaphorically. Can one yet resist subjugation and liberate diet from colonial relationships? I ruminate on the intersection of political power, geographies of food and land-based resources.

Removal: Removal begins with the digging up of indigenous people’s roots. Disconnecting indigenous children from ancestral knowledge that defines the meaningful relationship between the human and the natural world. Land dispossession leads to malnutrition.

Erasure: Genocide, plague and forced migration are buried beneath a fabricated historical tabula rasa that allows the colonizers’ offspring to draw maps for mining, extraction, and resource exploitation without question.

Dispossession: Through forced leasing uranium ore has been extracted from Navajo lands since 1944 leaving behind contaminated land and radioactive groundwater sources. Indigenous communities do not have regulatory authority over mining companies that impact their lives.

Whiteout: Fallout. Plutonium and uranium contamination. Operation Redwing was a series of the U.S. nuclear weapon tests on the Bikini and Enewetak atolls in the Pacific Ocean in 1956. Each of the hydrogen bomb blasts was code-named after a Native American tribe. The removal of the Marshallese by the U.S. government resulted in their semi-permanent exile. Food insecurity began.
‍
Blackout: Radio silence and censorship. Operation Redwing was hidden from U.S. voters during a presidential election year of 1956. The detonation of the equivalent of 1,388 Hiroshima A-bombs went unnoticed by the public.

The Year 2020, mining continues to extract mineral resources and the historical truth continues to be buried.
‍
Dig in.